Moving to a new city in the middle of the COVID-19 pandemic could have made for a difficult transition. Without the typical options of going out to restaurants, concerts or sporting events, getting to know our new home presented with some challenges. When my husband and I moved to Minneapolis in June of 2020, we were both sidelined from running by injuries. Fortunately, the vastly connected bike trails in the city gave us an excellent way to explore our new city and stay safely distanced. We quickly found ourselves riding our bikes for longer than we ever had before, and one of the key reasons we continued to cycle was that it was “easy.” We weren’t fighting car traffic in the bike-only lanes. We never ran into areas where the bike lanes abruptly ended, so thankfully, we never had to merge with vehicular traffic. I do not enjoy cycling while cars speed past with little concern for others on the road, but Twin Cities bike trails were relatively protected from this. My biggest complaint was that at times there were too many cyclists (how could I say such a thing)!

During medical school, I would cycle commute to class, but I only had to travel a mile on streets that were not busy (though there were no bike lanes). I’ve considered cycling to work at times since, but several barriers existed, including community factors such as lack of infrastructure connectivity (bike lanes that connect to one another and do not require you to abruptly merge with vehicular traffic), lack of protected bike lanes and sidewalks and poor lighting, as well as personal factors such as not having access to a shower when I get to work. In Minneapolis, so many residents cycle commute or just ride for exercise, and now I understand why: the city infrastructure makes it easy and enjoyable. This made me think more about what needs to be done for those in other cities to have the opportunity to reap the benefits of cycling carefree in their communities.

Cycling to work or school has many benefits, including:

Despite the benefits, there are barriers to cycling in many communities, including infrastructure connectivity, lack of protected bike lanes or sidewalks and poor lighting. Infrastructure connectivity is one of the primary barriers to cycling in cities in the United States. Complete Streets policies can help create communities where the choice to be active every day is easier and safer. Complete streets are designed to prioritize safety, comfort and right of way to walkers and cyclists to help create livable communities by prioritizing safety and public health. Eliminating additional barriers to cycling, such as narrow bike lanes, lack of separation from motor vehicles, challenging intersection crossings and snow-and-ice-covered bike paths are ways to make people feel more comfortable cycling. 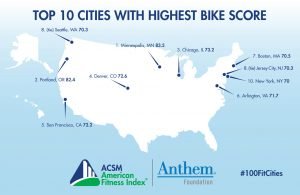 Although the ultimate choice to be active or cycle to work lies with each individual, providing access to safe, interconnected and well-lit bikeways should be a community responsibility, and community policies can help prioritize cyclists when planning a city’s infrastructure. The ACSM American Fitness Index assesses infrastructure connectivity using four indicators, one of which is the Bike Score®. Minneapolis, MN ranks #1 in Bike Score®, followed by Portland, OR, Chicago, IL, Denver, CO, and San Francisco, CA. But what has allowed these cities to rise to the top of the list? They primarily have a well-connected infrastructure with well-marked bike lanes that are often separate from motor vehicle traffic. Minneapolis implemented a Complete Streets Policy in 2016 that prioritizes pedestrians first, followed by bicycling and transit use and lastly motor vehicle use. Minneapolis has a growing bikeway network that encourages people of all ages to cycle throughout the year, both for exercise and when commuting. Many other cities have adopted a similar bikeway infrastructure, but there are still many cities that lack safe and well-connected bike lanes.

Author: Allison Schroeder, MD is  a Sports Medicine Fellow at Mayo Clinic Square in Minneapolis, MN. She will be joining the Department of Physical Medicine and Rehabilitation at the University of Pittsburgh Medical Center as faculty beginning in August of 2021.

We’ve all seen the increase in the number of available apps to monitor lifestyle behaviors such as physical activity, sleep and stress. There is also… END_OF_DOCUMENT_TOKEN_TO_BE_REPLACED

February is heart month, and wearable devices are becoming a larger part of heart health promotion and cardiovascular care. Wearable devices incorporated into clothing or… END_OF_DOCUMENT_TOKEN_TO_BE_REPLACED